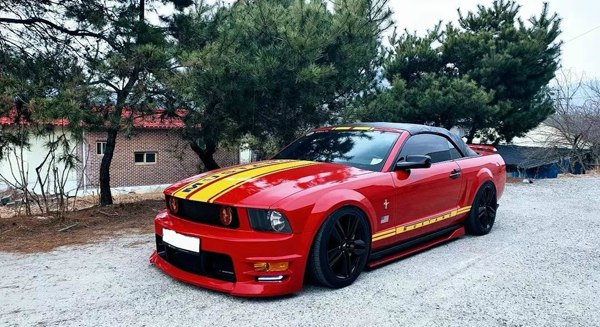 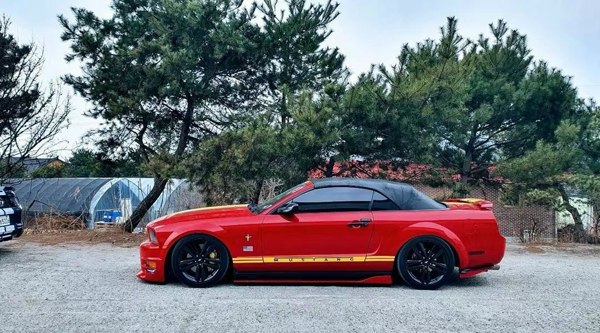 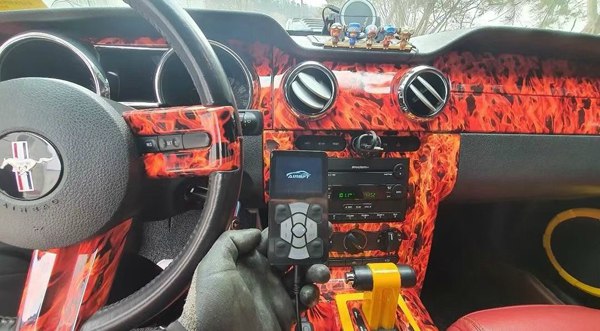 Hello, welcome to this place. There are different contents here every day. The freshest and hottest automobile events will be presented here. The hot content of this issue is: Shelby GT500 “convertible”, which looks like a Mustang and is also modified with “American style” Cobra logo

Recently, I came across an old Shelby GT500 “convertible” in a foreign country, which looks like a Mustang, and also modified the “American style” Cobra logo.

It is reported that this Ford is an old Ford Shelby GT500 convertible. It is a medium-sized sports car with a 2-door, 4-seat soft top convertible structure. The body is equipped with frameless doors, with a length of 4765mm, a width of 1879mm, a body weight of 1778kg, a wheelbase of 2720mm, and good operation and control.

This Shelby sports car is equipped with a 5.4L V8 engine with 540 horsepower. The body is equipped with a 6-speed manual transmission, with a maximum torque of 510 nm and a maximum speed of 260 km / h. It adopts a front and rear drive system, and can be completed in 4.6 seconds after 100 km. It is powerful.

Such a modified three-color “American style” Cobra logo Shelby “convertible” appeared in the airbft South Korea operation center, with a displacement of 5.4L, which is very rare. Originally, the tail logo of this sports car was a cobra, but it was modified into a three-color “American style”, which immediately increased the return rate. Moreover, this car is very rare in China, because the domestic old car culture is not strong.

Fashionable appearance: Ford Shelby GT500 is different from Ferrari, Lamborghini and other super sports cars with ultra-low streamline. The Ford Shelby GT500 is no longer simple and rich in sports style. It is just a restrained wild horse, and its passion is intoxicating. The wide and thick body and 19 inch wheel hub, together with the two-line pattern of the track, are the classic shape of the Ford Shelby GT500. The radiator vent of the engine cover ensures good heat dissipation of the engine. The concave and convex front face, the combination of the sharp and angular headlights and the air intake grille, such as the shark’s mouth, is aggressive and full of wildness and strength. The rear tail wing is designed to fit the body, which strengthens and reduces the wind resistance coefficient, and keeps the vehicle stable at high speed. The tail shape of the southern European design style is more full and unrestrained.

Interior details: the interior of Ford Shelby GT500 is simple and elegant, which is very consistent with the simple and clear style of American muscle car. The center console is dominated by black. The large screen display and silver decorative panel provide a good sense of hierarchy. The instrument panel is rich in information. The design and functions of the three steering wheels have good performance. Alcantara suede is used to wrap the two normally held positions at 3 o’clock and 9 o’clock. It has excellent hand feel and excellent anti-skid performance. The cobra logo in the middle of the steering wheel symbolizes the breath of the king.

Power supply: the new 3.7L V6 engine is an all aluminum duratec engine. The engine is equipped with a variable valve timing system, with an output power of 227 kW and a torque of 380 nm. The improvement of the electric power steering system and the aerodynamic package adopted by the vehicle are conducive to the improvement of the fuel economy performance of the vehicle. Among them, the power output is increased by 10%, and the fuel economy performance is increased by 3%. The matched 6-speed manual transmission. The grand and beautiful appearance and classic color matching of the Mustang really make consumers salivate. The fashionable functional configuration and its precise manufacturing process set a new standard for the design of Jinche. Its bold modeling design, powerful engine and rear wheel drive system are refreshing. It is indeed a wise choice for loyal and powerful consumers of Ford Mustang.